Did you miss the online discussion between TexTESOL V and Yakut TESOL on Tuesday, Sept. 15, 2015?
Click here to see the PowerPoint presentation and listen to the leaders discuss their partnership.

What does a Russian region settled by Cossacks in the early 17th century have in common with a region settled in Texas in the 19th century by cattlemen? Well, there are several parallels, including a dependence on horses for livelihood and survival. Then there’s the centuries-old struggle against extreme temperatures, albeit opposite extremes. The most recent connection, however, is a formal agreement between the TESOL affiliates of the two regions to work together for their mutual benefit. A formal signing in Yakutsk on July 14, 2008, cemented the partnership between Yakut TESOL and TexTESOL V.

–Adapted from Essential Teacher by Don Weasenforth and Larisa Olesova 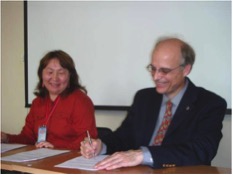 Since the summer of 2008, the two affiliates have completed the following projects:

What’s in store for the next decade?

Thank you for your interest in our organization. Drop us a line to get more information.